On the planet Taito lives the twins Bub and Bob. Could you help them to finish each round?

Puzzle Bobble is finally on the Amstrad CPC !

Here is our tribute to the Taito best arcade games.

Hi, I can´t play new version (1.2) in my cpc6128. Crazypiri´s screen freeze in the curtain!. I think is some archive of CRTC´S management. 1.0 version works perfect!. Can you modify the curtain after Crazypiri or eliminate it? Thanks

Some good improvements in V1.1. Especially that the aiming-line now is gone after the first level.

I found out, when i played this game longer in WinAPE Amstrad-CPC emulator, that it plays best, when i use 150% speed, instead of the original 100%. Then the whole gameplay is faster and more similar to the Arcade versions of Puzzle Bobble (Bust a Move). Only the music is much too fast then, of course.  :)

Nice, the next good improvement!

Yay, what a nice conversion from the Arcade. Congratulations!

Any chance of a tape version?

(Or does this have no chance of running on a vanilla CPC 464?)

I've made a tape version in .CDT form, any chance it can be added for others?

For any others reading this it will work on a 464, but 128kB of RAM is needed, so you'll need a RAM expansion.

Hi thanks for this game. I noticed some sound problem (depending of the emulator). Congrats guys for this amazing work :)

Here a gameplay with caprice forever 19.2.

Thanks for the game. I am a big fan of the whole "Puzzle Bobble" series and i own alot different versions of this game. Versions for alot consoles and computers, so I can make a good comparison. This version here is good overall, with nice graphics, nice music and so on, but i also found a few points, that i don't find ideal. To name some of them (not to be understood as criticism, but as a suggestion for improvement, if technically possible?)

(1) i didn't find a way, to turn off the aiming-line, because as a player you actually want to aim yourself and then logically not hit everytime exactly there, where you want to. That's what the gameplay is based on. If there's always an aiming-line active, you'll always hit perfectly, which shouldn't be the case normally. Wouldn't it be better here, to make the aiming-line deactivatable and instead, equip the gun with an arrow, so you can see where you're aiming? This then would be, like it is in the Arcade version.

(2) too much time passes, from pressing the firebutton, until the bubble then leaves the cannon. Sometimes, when things get tight, this leads to time pressure here in the CPC port, because you can't shoot several bubbles in a row fast enough, because the cannon doesn't provide the bubbles fast enough.

(3) there is unfortunately no "versus" mode at all, neither against a second human opponent, nor against the CPU opponents. This is a pity, because the versus mode is actually the most fun in all the ports of this game that i knew.

As I said, it's really great, that this good game is now also available for the Amstrad CPC, but these points could possibly be improved a bit, then the CPC-port would be even better.

Incredible, fantastic work !!! Thanks a lot 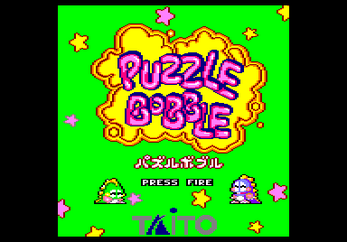 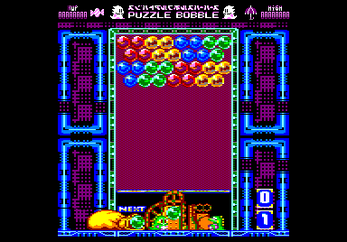 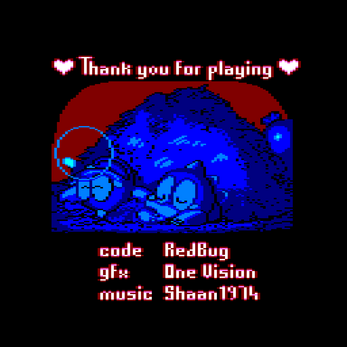